First of all, Happy Pride! I'm a partially closeted queer (Vocal and open about it online and to my friends, but I managed to hide that from my family for so long, gz. One day I'll find the courage to tell them, cause I still have not), and I hope you're all staying proud and healthy no matter where you are, and no matter your sexuality/gender/anything. ♥ Let's all work together to create a better society for all of us. ♥

Anyway, welcome to this month's Devlog! It's weird to think an entire month passed, and that there's still so much to be done. a.a As you probably already know, I'm Brazilian, and I've been really involved in all that's happening in Brazil right now, even though I'm not living there anymore. It's needed , and I made a really long post in English if you'd like to take a look and support the people in need in Brazil right now.

But while I believe artists should always strive to be politically involved and to share their views (and sources) with the people who matter to them—in my case, you are all part of this group—our sweet monthly Devlog is not the place for that, is it? XD haha So let's get this thing started cause I have a lot to show you.

Let's start with the not-so-cool stuff. I found yet more bugs in my programming that will *definitely* be a pebble on our shoes on CH03. And yeah, I fixed them, but I'm not really a fan of asking players to replay the game from scratch if it's not absolutely necessary, so to make sure you're all gonna have the same experience, and that no flag will be left behind, I'll put in place some code stuff that will ask players to remember certain decisions they made in case the flag in question is missing.

Don't worry, though, I'm already thinking about how I'll do that in a way that won't break your immersion. Wish me luck!

I managed to code the body language thing I mentioned in our last devlog; it works well, and it was way easier than I thought it would be! *cries in Python* If any of you are interested in how I did it, just leave a comment. It'll be a pleasure to add my code here so you can see how I tackled it.

I also *tried* to add small tooltips to each of the options so I could tell you why a blocked option was, well, blocked (rather than having the reason appear on the option itself, as things are now), but after a week of getting crash after crash in my code, I kicked the idea back to my backlog. I do have a few other ideas of how to do that, but they're all huge time-consumers, and I'd prefer to invest that time in writing + finishing up the new sprites.

I did a lot of stuff for the code and art, but not much writing this time. *grimaces* We do have additional ~2k words on CH3, but I'm not happy with that tbh. For June/July, as soon as the new sprites are ready, I'll focus solely on typing those words. :3 My to-do list for chapter 3 now looks like this:

+ Export and add into the game Mathias's [ redacted ] sprites.

+ Code the tooltip to tell the player why certain options are blocked;

+ (still considering) Add visual cues so the player will know which options influence personality, relationship with characters, story, and MC's backstory. Not adding these cues is also interesting. Maybe add an option to toggle them on/off?

People have been asking a lot about 5K's lore, and I'm getting really excited about it, so you'll soon see a few posts about it on my ko-fi. You can support my career + find a lot of cool stuff there!

Love, Hate, and love language for Mathias and Mandra (some curiosities about these babies)

Baby Mathias + Yvana having a serious conversation with Mercurio. Discover who Murdoch is and what King Elias was like when Matt was a baby!

A gallery with a lot of LtGBtK art (and phone wallpapers too, in case you want Matt's cute face staring at you the whole day A_A)

Melike's introduction (just in case you missed it)

One of you asked for a snippet of dialogue, but I thought I'd tease you a bit with the first two minutes of the next chapter instead. haha! I hope you'll enjoy it! :3 ♥

Aaand, last but not least, here's a cute BG reveal to you all.

This is Kerana's Hall, sometimes used as a throne room when Opalean Monarchs have Dignitaries from other Kingdoms. It's a sacred place in the Castle, and the room where the Blooming Ceremony will (maybe) take place. *wiggle eyebrows* 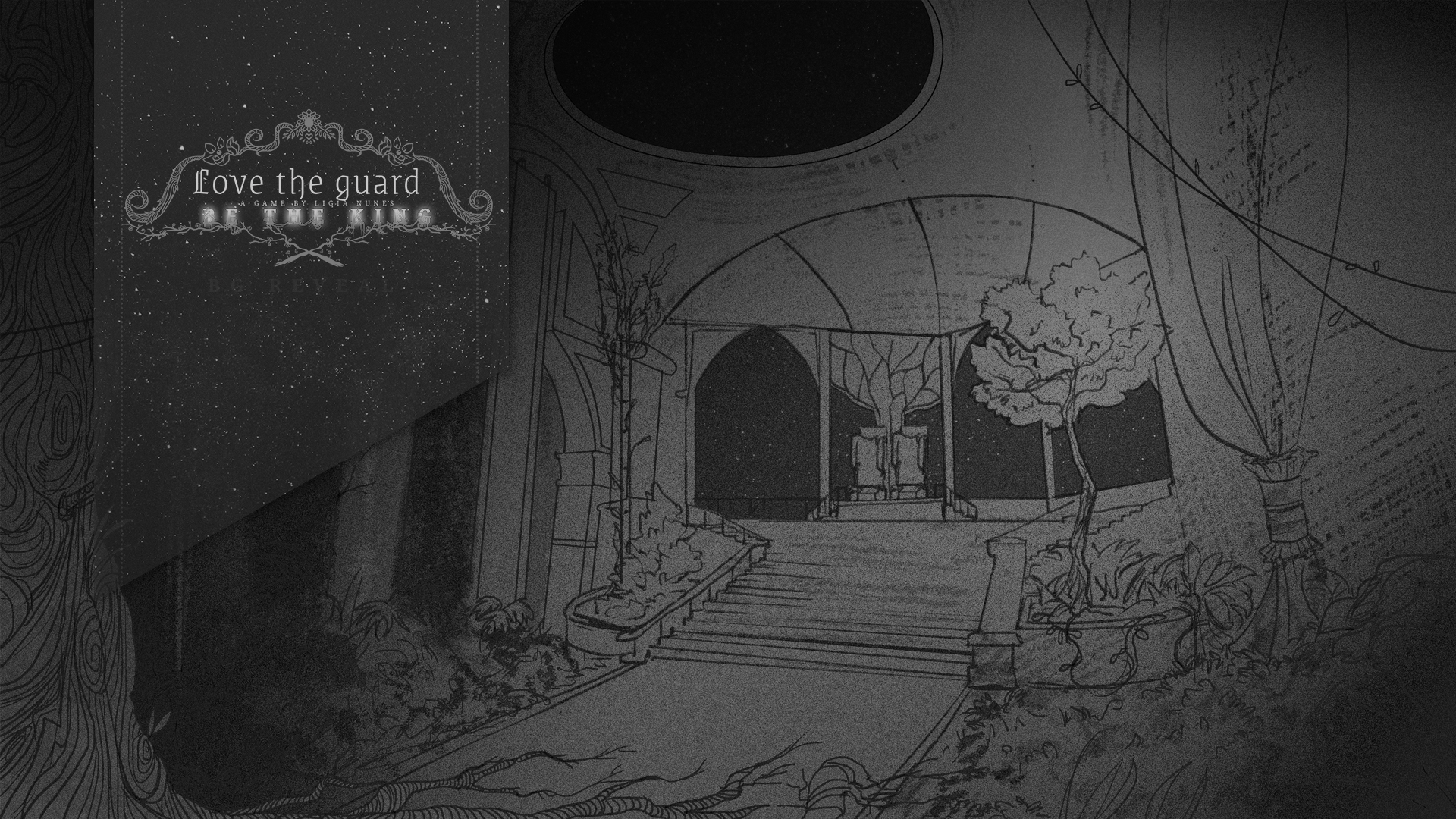 Thank you for reading this Devlog and for being at my side during the development of my baby. :) If you'd like to support me further, you can always share my game with your friends, leave comments, and check my ko-fi to read more about the game and donate if you can. If you just want to say Hi or if you have questions/concerns about the game, you can find me on Tumblr. If you wanna talk about translations or anything business-related, you can send an email to contact@ligianunes.com

Se you all soon!

Get Love the Guard, Be the King

Download or claim
On Sale!
100% Off
Name your own price

Love the Guard, Be the King

The Kingdom and its future monarch are in your hands. The choice is yours. Love the Guard or be the king?

Thanks for the update! The preview of the next chapter makes me even MORE excited to read it, and I'm so curious to find out who the new [redacted] sprite is!

Oh, yaaay! Mission accomplished B) hahaha. Thank you for your comment ♥

Thank you for the Devlog, is super cool seeing how things are going! I loved the chapter preview ❤ and the new bg!

i'm so excited for the new chapter and new content!

I'm interested in how you coded the body language thing!! It sounds like an accomplishment you are proud of, and I would love to hear all about it :D

Oh, I'm definitely proud! hahaha! Thank you for your comment. ♥♥♥ I'm writing a small tutorial here to show how easy the code is and will soon share it with you! 8D